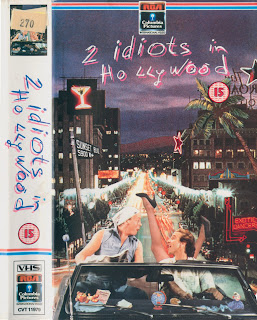 ... a celluloid two-step in which the fourth wall is nothing but a whirling disco ball into which the cast and crew pontificate, proselytise and plead for forgiveness... 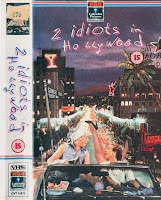 Cherrypick: “Hippies, Yippies and Beatniks have turned the ‘Me Generation’ into a cruel joke!”

If, after the perceived disaster of Dune, David Lynch had failed to reclaim his position as Indie Laureate with caustic picket-fence puzzler Blue Velvet, he might very well have ended up as a journeyman hack slathering his twisted metal soundscapes and stifling mood-mares over outwardly simplistic fables of Hollywood’s also-rans such as this. There are those who say he actually succumbed to this malaise years ago, but no matter: the point is that if it could so easily have happened to a master such as Lynch, who’s to say that many of the more outré gems that made up the glistering fallout of the VHS mushroom cloud didn’t come from similarly talented directors who had glanced upon Lady Fortune’s less charitable aspect?

Two Idiots, for example, is, in essence, the chronicle of two forty-something defectives from Dayton, Ohio and their slap-happy relocation to the ashy tract housing and crimson parlours of downtown Hollywood. It’s structural audacity, breakneck cutting, sly self-reflexivity and narrative pliancy, however, transmutes the films feeble production values and back-alley conception into a slipshod Slaughterhouse-Five for our times; a benign Being John Malkovich, or - for the young uns reading - a Speed Racer running on bad acid.
As well as the grubby parallels with Lynch and the extent to which the film surely informed the subsequent careers of the Wachowskis and – more pertinently – Charlie Kaufman, there is a prevalent strain of cinematic hypertension that prefigures Oliver Stone’s late-Eighties move from the conventions of Platoon and The Doors into the hallucinatory maelstrom of editing and photographic techniques that illuminate JFK and U Turn. Wilfully degenerate library-shots, film stock that often flip-flops mid-scene, continuity bear-traps that constantly keep the viewer on their toes; all are employed in the service of a celluloid two-step in which the fourth wall is nothing but a whirling disco ball into which the cast and crew pontificate, proselytise and plead for forgiveness.

Directed by Stephen Tobolowsky (best known as the terminally annoying insurance salesman Ned Ryerson in Groundhog Day and for writing True Stories with David Byrne) in a style that makes Naked Gun look like Derek Jarman’s Blue, TIiH is episodic, nonsensical and undeniably enjoyable. Tobolowsky might have been advised to eschew the lengthy psychosexual musical interludes of ‘Donkey Magic’ and ‘Big Men, Big Women’ and myriad fantasy sequences - the mildest of which sees the camera zoom into character’s ear to reveal a mental montage of people trying on watches - but he’s wise enough to know, like Kubrick before him, that when it comes to these overblown genre think-pieces, you sell the sizzle – not the steak!
Talking heads criticise the film even as it unspools, shares in the director’s next project are touted at every possible opportunity and the ghosts of William Castle, Godard and Woody Allen are honoured in a courtroom finale set in a carpeted swimming pool complete with two-headed judge, a well-stocked carvery and a naked jury that degenerates into a close harmony rendition of ‘Blow the Man Down’. Is it any wonder that the director chose to blindside his distributors and the audience with asinine gimcrackery or outsize erotica..?

Two Idiots is a truly awful film that somehow manages to be both shockingly amusing and amusingly shocking - which could be as fine a definition of pure cinema that one could ever possibly hope to conjure. 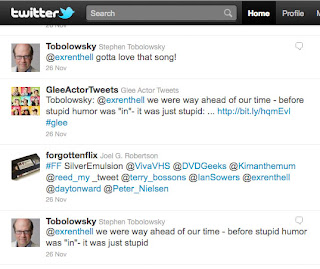