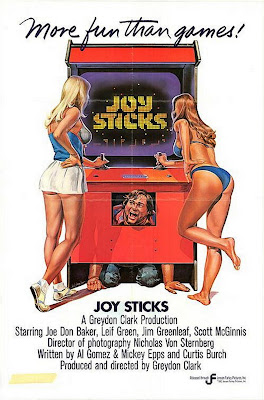 The kids are funning it up and City Hall wants to drop the curtain on their good times. We’ve heared this song before, but Joysticks is a lament, not a hymn...

It would be remiss to steam into any review of a film as far-reaching as 1983’s mammary-minded button-jabber Joysticks without first checking the grubby fingerprints of the unregistered clown school rejects that somehow scavenged together the fears and obsessions of the video generation into a fully-formatted pixilated zeitgeist that gifted the era their Altamont; a dark and kaleidoscopic prism through which the videovisual Eighties could rewind a splintered decade.
Produced and distributed by the dubiously monickered Jensen Farley,  purveyor of superannuated bongo flicks and third-tier schlock horrors - as well as Timerider: The Adventure of Lyle Swann, which for ERH’s money is the greatest film title since Children’s Toilet (1897) – Joysticks would appear to have skin and shock credentials to burn, but little feel for the beat of the street. Enter director Greydon Clark, a cinematic ambulance chaser who had already proved that he didn’t need a weatherman to know which way the wind was blowing with such à la mode polemics as Satan’s Cheerleaders, Black Shampoo (literally an all-black version of Warren Beatty’s Shampoo) and Skinheads. Together they would come to do for the neon Valhalla of the video arcade what Harpo Marx did for the telephone.

Essentially a itchy-trigger showdown between the nerds, jocks, Pasadena punks and bleach blonde Valley girls that make up the console community of some jerkwater Californian burg and local busybody/mob bagman/boiling-point puritan Joe Don Baker’s attempts to shut down their gilded palace of sin, this is the underdog story writ large: Footloose for four-eyed Freddies; Amistad for Amstraders; Rocky for ‘tards. The kids are funning it up and City Hall wants to drop the curtain on their good times. We’ve heard this song before, but Joysticks is a lament, not a hymn.
But we get ahead of ourselves, for every Kong needs his Mario, and our guide through the neon-edged netherworld of arcade fire is one Eugene Groebe – an entry-level Pointdexter complete with bow tie, three-pleat chinos and brutal horn-rims. Drafted into the food counter of his neighborhood video parlour – a facility whose W.I.C. (Wiener Into Cleveage) count stands alone in modern cinema – Eugene is our pratfalling Passepartout around the world of cabinet chaos, breasty bi-play and internecine intrigue that all threaten to take the unwary viewer’s eye off the ball. We would, however, do well to remember that this was the American Eighties, where nothing was as it first seemed…

Not only was the Cold War raging, but American heavy industry was buckling under the yoke of the Rising Sun as Japanese corporations employed inscrutable long-game business plans in order to break the back of US manufacturing. And where better for the Asian appeasers to psychically feed and water the armies of disinherited American worker drones while they flooded the market with cheap electronic gee-gaws and efficient automobiles than the inescapable 8-bit Matrix of their own fiendish video ‘entertainments’. The battle for American industry would not be fought in the boardroom or on the picket-line but on the breaking grounds of Galaxian and Pac-Man. The irony, of course, is that the vanquished foe would be paying a quarter a time for the privilege.
Thus Baker is ultimately revealed as the hero of the piece. The big-boned barbarian at the gates is become an unheeded saviour; the herald of economic collapse and societal malaise destined to be forever shunned and ridiculed by the silicone sybarites raining outsize barrels down upon him from atop the city walls.

Never mind that Joysticks is episodic, crass, prurient, boneheaded, rudderless, baffling and groans under the production values of a Central American snuff movie - it is also binary wake-up call to a goggle-eyed nation blasting away at the wrong kind of space invader. This is Cinema as Smuggler: subversive, slippery and - to paraphrase Hunter S Thompson – stupid enough to be totally confident.